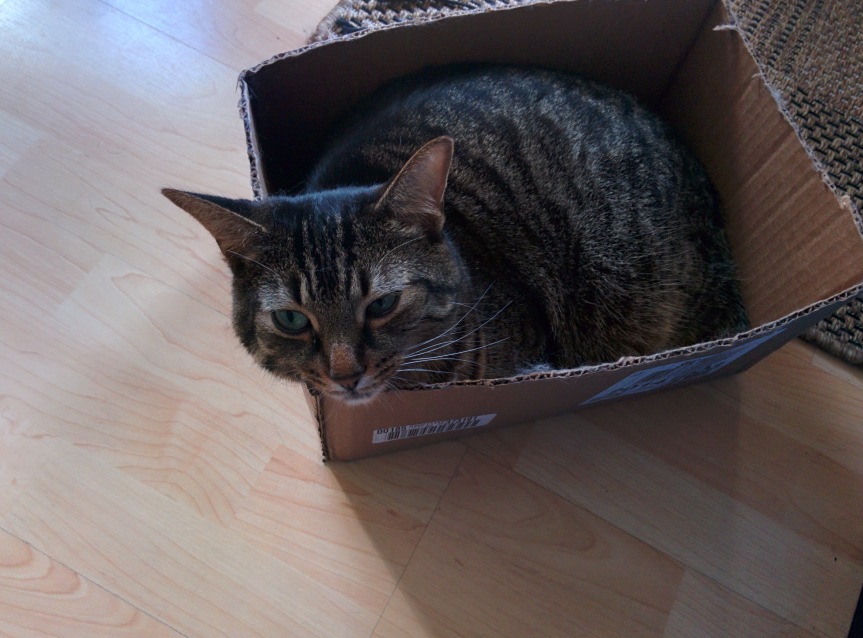 Virtute slunk around the house as it was his last day on Dublin street.  He found comfort in an undersized box that could barely contain the size of his frame.  The box had taken on his familiar shape through weeks of use and in this final day of 2015 it had become an important resting place.  When Virtute works to create a perfect resting place, he is better able to be reflective and contemplative.  So it was around three o’clock in the afternoon when he summoned me downstairs. “Do you have a pen and notepad,” he asked in a dignified voice. “I’m ready to speak.”  I had been pestering him for a few weeks about the need to prepare for our 2015 Year in Review because of the immense importance given to this practice in our favourite book, How to Make Your Cat an Internet Celebrity: A Guide to Financial Freedom, but we had so much to prepare for and think about that it was tough to get ready for this important time of reflection.  So, I was very responsive when Virtute said that he was finally ready to speak, although I reminded him that since we are bloggers, I would be eschewing analog devices like pens and notepads for the clicking of computer keys – – something that Virtute generally associates with a lack of attentiveness to his needs.

Nonetheless, I sat fingers in the QWERTY position awaiting his pronouncements.  “2015,” he began, “was an extremely tough year. There was, of course, the long and exhausting Gumption food strike that coincided with the CUPE 3903 strike in the dead of winter. We experienced the passing of a number of important people like Grace Lee Boggs and Eduardo Galeano. And most recently there was the big change which has resulted in this big move. So I have to say that I am glad to see the calendar flip to 2016 inasmuch as you follow the imperfect Gregorian time-counting system. I, for one, am more partial to the lunar calendar, even if I’m not always sure what year it is!”

I told Virtute that he was making me sad, that our readers don’t come to our blog to hear us lament about our pains and misfortunes.  Virtute, unimpressed by my interruptions, meowed at me in the snappy way that can only be explained as frustrated and anxious at the same time.  I was going to miss Virtute’s mean streaks. He set his eyes on me with a steely gaze and proceeded, “As I was saying before I was rudely interrupted, it was a difficult year – but it was also one filled with magic, adventure, and joy!”  His tone lightened and he began to speak in a more manic way, “This was the year that I perfected flight! This is the year that Drake reminded me of the importance of Moms! We had so many delicious home-cooked meals and we didn’t just mourn! We also celebrated the 25th year of OCAP‘s vibrant and important movement-building in this city and the Blue Jays‘ first run to the post-season in 22 years! We’ve also pondered the ultimate question of life, the universe and everything – it’s still 42 by the way. All in all it was a year of great personal growth and development. I’m so thankful I shared it with you. You can put your pen and notepad down.” I stopped typing on my computer thinking about how Virtute is a traditionalist until the bitter end.

I pet his head and gently placed him in the only enclosed space he hates (his carrying crate) and we said our goodbyes.  It’s been a couple weeks now and the house is a little quieter, the food lasts longer, and I find myself engaged in fewer philosophical debates. I know that these last couple years living with Virtute changed me in profound ways.  And though we are taking this space apart, I’m excited for the possibilities that 2016 will bring, regardless of it’s spurious foundations in Greco-Roman imperialism.

Just as I was getting all sentimental, Gumption walked into the room, a baseball fan since “day one,” she was quick to point out that if the Blue Jays were going to be world champions this season, they will have to break the magic spell of the San Francisco Giants. The Giants have won the World Series in each of the even numbered years of this decade (2010, 2012, 2014).  She added, “Sometimes it’s okay to break your routines and try something new.  Hopefully, it’s something you can learn from the Giants when they lose to the Blue Jays this season.” And with that we counted 38 days until pitchers and catchers report for spring training and started to dream about the possibilities lying ahead.