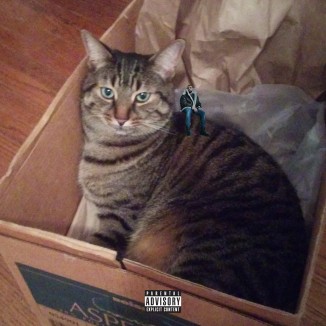 Earlier this morning Virtute declared that it was time for the world to receive his analysis of Drake’s latest album.  Ever since he made it his life’s mission to preach Drake’s talent to the known universe, Virtute has been dropping bits of wisdom about Degrassi’s most famous graduate.  Most recently, he praised Jenny and the city of Toronto for their mothering skills in a tribute to Drake’s mixtape, if youre [sic] reading this its [sic] too late.  Even Gumption has gotten in on the act. So it was only a matter of time before he was set to make his views known…on Views. Thus, when we were awoken this morning at the crack of dawn to Virtute’s sulky meows, I knew something was up.  These aren’t your usual “I’m hungry, please feed me” cries for help, but rather the types of cries that say, “All of my let’s just be friends, are friends I don’t have anymore. How do you not check on me when things go wrong? Guess I shoulda tried to keep my family closer…much closer.” You know the type of woe-is-me line that might open up a Drake album.  The type of line that makes you want to take up your responsibility as family. Jenny needed to get to work early so I thought I’d try to stem the cries from waking everyone else up.

“What’s up?” I asked Virtute who skittishly slithered along the hardwood floor to avoid it from creaking.  Distressed, he explained, “Since moving to Ellis Park, I’m too far away from a major street to hear whether people are pumping Drake’s new album from their cars! How can I have my pulse on the city if I’m out here in the wilderness of High Park?  I need to get out of the house, I have to make it to Dundas Street or College or whatever! Just anywhere where there is wall-to-wall traffic so I can gauge whether or not the city is feeling Views!”  I was about to respond, perhaps offer recording my walks down Bloor Street, but he abruptly interrupted me…”I need to get downtown! I made a decision last night that I would die for it…just to show the city what it takes to be alive for it!”

I pulled out his favourite brush and started to calmly brush the angst away…Virtute is a mushball for grooming.  Finally, I explained to him that perhaps the best way to gauge the city’s reaction to the album was to submit a review in his diaries.  “It’s been so long,”
he said. “It feels like I haven’t posted a journal entry since Drizzy was sippin Hpnotic with Glenn Lewis and hanging with Jellestone.” It was clear that he hadn’t lost his touch for melancholy and theoretical reflection, so I told him so.

Ok, he said. Here it goes, “Drake’s Views is not #lemonade, it is not #moonshapedpool, it is not #topimpabutterfly. It exists not to push us to discuss and debate our interpersonal, cultural, political, social, or even spiritual selves – no – it exists as a contribution to this infinite summer of 16 that we are set to embark upon.  We’ll all dance this summer to Controlla and we’ll split a Ting with each other.  We’ll all dance this summer to One Dance as the Raptors go to OT OT OT again, again, and again. We’ll all dance this summer to Feel No Ways and explain that ‘there’s more to sleeping in and getting high with you’ as the dispensaries lose their licences.  But we’ll also share nostalgia about the days when ‘Vince Carter was on some of that through the legs/arm in the hoop shit’. In essence, it is an ephemeral album to share with each other and remember that even though we are a big ole city of screwface specialists, we may – just for this summer – share space/emotions/love with each other…and maybe find redemption”.  Eloquent as usual, I explained to Virtute that folks are always interested in the numeric pitchfork style score he’d give to the album.  He responded, “I’ll turn the 6ix upside down….it’s a 9 now!”