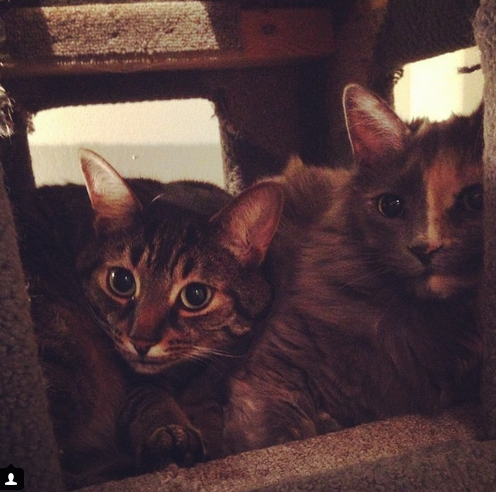 Virtute scurried his way through the slightly open crack of the screen door as it rocked itself shut.  The weather was getting cooler and he knew that the long winter time would soon be approaching.  Gumption, as she is known to do, was passing the afternoon lazing around in their cat condo.  Whenever anyone asks her why she isn’t up and about like Virtute, she likes to respond, “I’m keeping his spot warm for him!”  Such is the life of a cat.

But with such a busy summer time coming to an end, today seemed just a bit more overwhelming and they both took a deep breath as the crisp air that had enveloped Virtute’s coat mixed with the radiating warmth of Gummy’s sedentary heating technique.

As I caught the cats in the process of their ritual kinetic transfer, I asked them what stood out the most about this particular summer.  Virtute, always eager to chat, curled in a bit and then began, “What perhaps began as an unfreezing of the cold winds of change that had been blowing over the winter, has now erupted into the beginnings of some powerful storms of justice.  From Black Lives Matter to the Standing Rock Sioux resistance to the Dakota Pipeline, from the refusals to stand for the US national anthem to the assertions of Black and Indigenous ways of being in mainstream music and arts, this year has shown us glimpses of the worlds beyond these oppressive power structures.”  He paused, if only momentarily, to check if Gumption was going to jump in and seeing her slowly fading back to sleep, he continued, “I really thought this year would be the year of Drake – the summer 16 we’d all been waiting for – but the release of such incredible music by Blood Orange, Frank Ocean, Chance the Rapper and so many others really has me re-thinking it all. I feel like Summer 16 was more than Drake could have imagined.”

Virtute, wise beyond his years, stopped and paused. He had found the perfect temperature and was now content.  I was about to go on with my day, when Gumption stirred herself awake. “Is he done?”, she whispered so inaudibly that I could barely catch it.  Yes, I assured her – which is never really a sure thing with Virtue.  “Good.” She said. “He’s definitely not wrong about this summer, but I’m still scared from watching Stranger Things and can’t wait for the winter sixteen to begin so that I get more cuddles at night. I can never look at my laser pointer cat toy the same way ever again.”