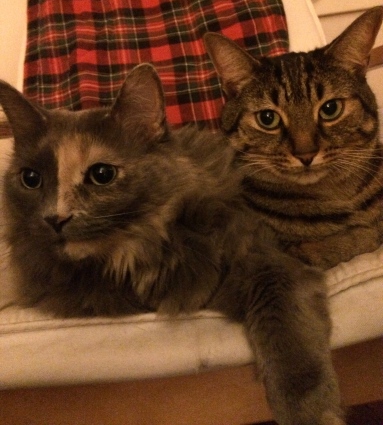 Virtute pawed at my shoulder, “Hey! Hey!” he exclaimed, adamant to get my attention.  “I know you said you wanted to retire the blog for a while, but we can’t let it die in 2016. It feels like that’s what’s been happening all around us.” Virtute isn’t much for sentimentality so I relented.

“Quick, get your machine! I want to broadcast a message to the world!” He quickly assembled Gumption onto his chair and before I could explain that this wasn’t exactly how it worked, he had already begun his manifesto.

“Dear people of 2017, it is I, Virtute the Cat, with an important message,” he adjusted one last time to ensure he was looking directly in the camera just as it was explained to him in his favourite book How to Make Your Cat into an Internet Celebrity, and restarted.

“Dear people of 2017, it is I, Virtute the Cat, with an important message.  Gumption and I have also gone through a tough 2016, there was the operation to make Gummy bionic, there were the hours I spent fretting about the future, and there was the need to come to the hard realities of taking a knee. We lost many of our heroes and mentors this year.  We saw the election of a fascist tyrant, the rise of fascism and white supremacy globally, the team with the most racist logo in baseball in the World Series, the continued attempt to build oil pipelines in violation of the desires of Indigenous nations, and the ongoing atrocities backed by the West in Syria, Afghanistan, Palestine, and many other places.  2016 was indeed a dumpster fire.  But the good thing about dumpster fires is that if you turn them on their side, they become very effective means of resisting police brutality, as our friends in Montreal have taught us for ages!

So let’s turn this dumpster fire of a year onto its side in 2017! Let’s invoke the spirit of Ali, Castro, and Afeni Shakur, to mobilize our people and fight for justice! Let’s inhabit the personas of Bowie, Prince, and George Michael and disrupt all gender binaries! Let’s draw on the inspiration of Carrie Fisher and fix the script of the next four years by building the largest anti-fascist/anti-racist/anti-capitalist/anti-colonialist movement the world has ever known! We will draw from the genius of Vera Rubin to delve into the dark matter and reconnect to our oldest ancestors (the stars).  We will be like a blazing José Fernández fastball and not be beaten down. We will be like the ageless Gordie Howe and will commit ourselves for decades to the task at hand. We will be like the formidable George Martin and will do all of this with beauty and grace and impeccable style. Like the steadfast Ralph Branca, we will continue to build our support for Black liberation struggles and continue to take a knee like Colin Catnip.

And with a flourish it was over.  I turned to Gummy who had been sitting quietly as Virtute expounded his manifesto, “anything to add Gumption?” Surprised by the question, Gumption turned slowly, “Oh…uh…uh…be nice to each other in 2017,” she said quietly. She paused, looked specifically at Virtute and then continued, “And let’s not just talk about things. Let’s do them.”

True to her name, Gumption added the missing ingredient to all manifestos – the will and action to make them into reality. Happy 2017!