“Diaries has quickly propelled from the 14th best cat blog in Toronto’s west end to cracking the quadrant’s Top 5 with unmatched wit and candour. Onwards and upwards comrades, the apex of the cat blogging tower is within reach! ” – Ryan Hayes

“Virtute is a better cat than Gumption” – Jenny Chan 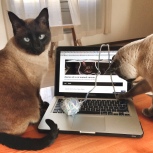 “Not since Natsume Soseki’s 1906 work, “I Am a Cat,” have we read such a tail. Virtute’s meowsings about human nature never rub the wrong way. Instead of having us chase a tangled yarn, he unravels it slowly, amewsingly, and often leaves us grinning like Cheshires. It’s purrfect!” – Rupert & Finnegan, Tokyo

“Diaries is the voice of a generation. Virtute’s musings on politics and philosophy, love and life, has done much to mend the inter-species chasm. I would much rather spend an evening in communion with Virtute the cat than Meow Mix the cat, whom – might I add – is a meanie.” -Sparky the Dog

“Diaries of a Cat Named Virtute is kind of psychic, like it has a fifth sense. 10/10 in the categories of baseball, cats, advice, and over all fetch-ness. Dont let the haters stop you from do your thang Virtute/Craig.” -Kevin G

“I suspect that Virtute and Gumpie are reincarnations of the cats who spent time with T.S. Eliot. You just never know. Even if they weren’t, they’d probably have met them, hanging out in the alley with the Weakerthans.” – Lesley Wood, Author of Direct Action, Deliberation, and Diffusion

“Virtute is to Craig Fortier as Don Durito the beetle is to Subcommondante Marcos. Virtute knows what side the bread is buttered. His politics are solid. He can fly. But he knows we can too. So our hearts beat faster and we smile.” – Lesley Wood, Author of Crisis and Control: The Militarization of Protest Policing

“A collected memoir of the life and times of Toronto’s most prominent Drake fan, “Diaries” is the purrfect encapsulation of modern life as viewed from the 6. From the tragedies of accidental Coldplay to the triumphs of forging felidae friendships, no amount of alliteration can provide sufficient praise for a blog formed of sublime reflections made manifest.” – Andrew Thompson, contributing advice columnist for The Guardian

“Virtute’s musings are insightful, intelligent and witty. He offers thought-provoking views of the world while giving us a glimpse into the everyday challenges he faces as a cat which surprisingly, are not all that different from some of the obstacles we face as humans. Virtute is an inspiration!”  – Winnie Chan

“In my time behind the counter of a bookshop, I’ve seen a lot, I mean A LOT, of books about cats, and most of them offer me nothing of substance as a reader (ok, I admit that I chuckled once or twice about Grumpy Cat, and I did like a few of the poems in I Could Pee on That). Perhaps that is one of the main reasons why I appreciate Diaries of a Cat Named Virtute and look forward to the posts every week. Instead of cheap gags and gimmicks, Virtute offers thoughtful musings that feel real, grounded in the here-and-now, and connected with issues and questions that stimulate and inspire me as a citizen, as a ball player, as a poet. I also dig the fact that the photos with each post reflect Virtute’s meditative personality and never stoop to undermine his dignity. Well done, feline friend.” – Jo Jefferson, Author of Lighting and Blackberries

“Witty, insightful, humorous and super, super cute. Not only is it an enjoyable break in my day, but I always walk away from the computer learning something, whether it be a life lesson, political insight or having a new appreciation for cats. Keep on writing Craig!” – Joyce Varvodic-Chan

“The dark master of clinical introspection, Virtute and the blog they write, are a faint tungsten glow in the midst of a gloomy, misty twilight (My human is eating, she is eating and she knows I am here, why does she not share, can she not sense my hunger?). Free from the muck of human concerns, Virtute is free, save the constraints they impose upon themselves (If I had a sandwich I would share it, why does she not share it). Discreet and restrained, their words open doors, their views warm cold detachment and distract me briefly from my constant hunger (she has given me a crust, my endless wheezing abates)” – Penny the Beagle

“Reading Craig Fortier’s blog reminds me a lot of a magical evening in April of 2014 when I was sitting in the Rogers Centre watching the Jays take on the Houston Astros. Fortier’s writing makes me feel like we’re up 7-3, when you’re only up 5-3, and just when the game can’t get any better, Dioner Navarro steals second.” – Jan Braun, Author of Somewhere Else